One of the biggest culinary holes in the Bible Belt has been the absence of authentic Dim Sum. Unless you have traveled outside the area you may think Dim Sum is merely the name of a dumpling found on most Americanized Chinese Buffets. But real Dim Sum is something very different. It is not one particular dish but a celebration of several dishes. If you are looking for an authentic Dim Sum experience, you must check out Asian Palace. Driving down Summer Avenue in Memphis evokes memories of the still surviving Drive-In theater and the Memphis of the Seventies. Summer has changed a lot and has a new assortment of businesses, people and restaurants. In the end of a busy shopping strip mall, Asian Palace appears very much like many of the cookie-cutter buffet restaurants that can be found slinging msg throughout Memphis. But as you open the front doors, you are met with a grinning face of a gold colored Buddha. An omen of joy that you will soon find behind the doors of Asian Palace. 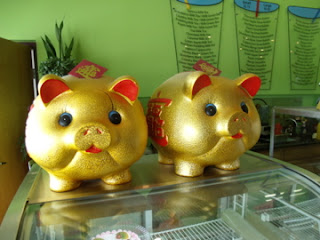 Every Saturday morning at 10:30 a.m. Something extraordinary happens. The streets of Summer Avenue are rolled up and replaced with an authentic Chinatown experience. Waitresses begin rolling out chrome carts filled with boiled, fried and and grilled Chinese delicacies. Patrons can simply point to the items that they would like and the staff serves them fresh. Let's talk about variety. The Dim Sum menu ranges from very familiar dishes like Spring Rolls and Pot Stickers to the more exotic like Pig Skin and Blood served with chives to Chicken Feet. Each item runs from around two dollars to a little over five dollars depending on the size of the dish. Served this way, you can try a little bit of everything at a very affordable price. 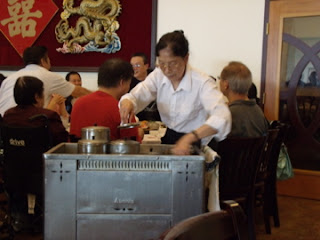 I started out with some very familiar items. Lightly fried golden Hong Kong style Egg Rolls and a Fried Shrimp Ball. The fried shrimp ball is an amazing golden fried plate of deep fried rice noodles wrapped around a buttery battered fried shrimp. Light and crunchy, this dish is delicious. 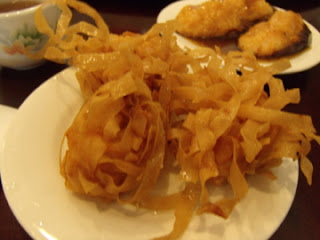 I then tried my personal favorite Steamed Pork Bun and a the Fried Eggplant stuffed with Shrimp. The fried eggplant is part juicy seasoned eggplant and part golden fried shrimp. The tangy taste of the eggplant is subtle while the sweet fried breading of the shrimp makes a fine compliment to the eggplant. It is at this point during the meal that I begin to take notice of the 'carnival' type atmosphere around me. Silver carts filled with smoking fresh dishes from the kitchen are being wheeled around tables filled with families and friends. The tinkling of silverware and the silence of chopsticks can be sen and heard at tables throughout the room. The crowd is not overbearing. Many of the patrons are from the Chinese community and have brought elderly men and women with them. This is a good sign. This speaks to the authenticity of the food. 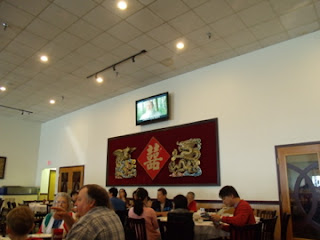 As I am taking it in, a white haired Chinese lady appears beside me seemingly as from out of nowhere. “Try this” she says. She lays a plate on the table in front of me. Amazing colors and smells fill my senses. A waitress leans and tells me “she is the cook!” I smile and thank her. 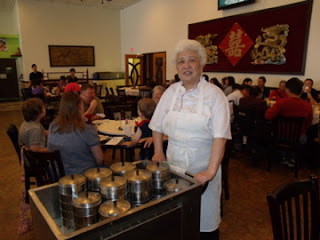 She tells me that this dish is not on the menu but can be ordered during Dim Sum. Fresh Clams and Black Bean Sauce covered in fresh chives. The owner tells me that the clams are cooked freshly shipped in from Seattle. When he said fresh he was not kidding! The clams were so tender and juicy and did not taste fishy. The sauce is a dark savory gravy that is salty and earthy. Breaking the clam meat from it's shell, I dip it into the sauce. And what...I have a steamed pork bun that I can drag through the remaining gravy....Oh heavens.... 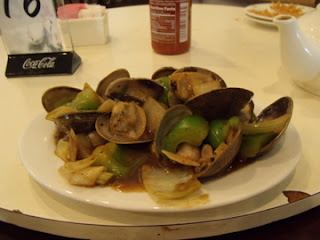 Asian Palace has been serving authentic Cantonese dishes since 1988 and has existed in several locations throughout Memphis. Today, the restaurant has made it's home on Summer Avenue since 2010. The owner is Mister Mike Woo who heads a tight-nit crew of cooks and servers. The head chef is Lisa Chen. Lisa cooks Cantonese, Taiwanese and Szechuan dishes. 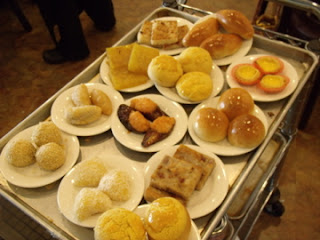 One of the very cool aspects of Asian Place is there ability to serve fresh seafood. There are numerous aquariums filled with gigantic specimens of crab and lobster. Chef Lisa can take a King Crab and drop it into one of her sizzling woks filled with Szechuan chilies and fresh vegetables. 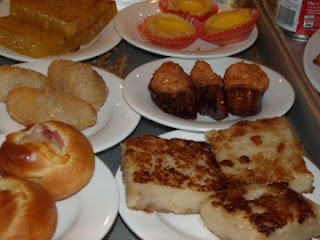 They also serve specialties such as Peking Duck, Chinese Barbecue Pork, Shark's Fin Soup and Duck Broth Soup.
I have experienced some tremendous Chinese food in three separate Chinatowns of New York, D.C. And San Francisco. Asian Palace offers some of the most delicious, most authentic Chinese food I have had outside of Chinatown. You must do yourself a favor and take a Saturday or Sunday and drove over to Summer Avenue to experience Asian Palace.
Asian Palace is located at 5266 Summer Avenue in the Perimeter Shopping Center.
Posted by Tony at 2:30 PM 1 comment:

A Recipe for Deer Hunters and Asian Food fans...

I don’t consider myself much of a ‘hunter’.  Growing up in West Tennessee, I have many friends who hunt and are quite good at it. In fact, when I walk into their homes it sort of looks like a wild game safari lodge with busts of deer heads, robust turkeys and flying ducks all mounted on their walls. My earliest memories of hunting are filled with traumatic memories of dislocated shoulders from the ‘kick’ of a shotgun, aching feet from long hikes and 'shushes' from others in the duck blind.
So while my hunting skills are quite ‘lacking’, I have plenty of friends who enjoy the outdoors and the sport itself. Some of these friends have been known to bring me specimens of game that they have tracked down in the wild. I have had the opportunity to receive wonderful treats like duck breast and venison from friends who hunt regularly. So while I can’t offer them an exchange of wild game, I can offer this recipe.
‘Vietnamese noodles with Grilled Lemongrass Venison' or ‘Bun Thit Nai Nuong Xa’
For those not familiar with Vietnamese food, Vietnamese cuisine is marked by a number of distinct characteristics. First it is typically served with fresh ingredients. Vegetables are cooked briefly to keep their freshness and color. Secondly, Vietnamese food typically includes fresh herbs and vegetables. Lastly, most Vietnamese dishes will contain the five elements of spicy, sour, bitter, salty and sweet. Vietnamese food is also said to appeal to ‘five’ senses. The first is the arrangement of the food that attracts the eyes. Second is the ‘sound’ of the 'crunch' of fresh ingredients attract the ears. Third is ‘spice’ that attracts the tongue. Fourth is the ‘aromatic’ smell that attracts the nose and lastly, some elements become ‘finger food' that is perceived by touching.
Vietnamese food is complex but is made with simple natural ingredients. For this recipe we can start out about a pound and a half of venison or beef, thinly sliced. 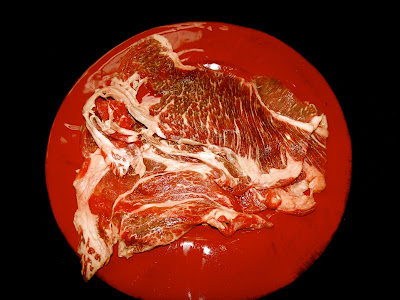 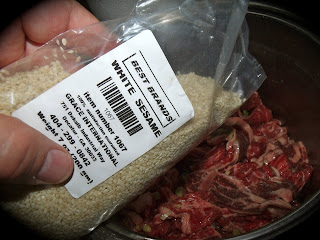 Next we will create a marinade. Combine a tsp of salt, 1 tablespoon of Fish Sauce (available in most Asian markets), 2 tsp of sugar, 1 tsp of black pepper, 1 stalk of freshly chopped lemongrass, and 1 tablespoon of sesame seeds. Combine these elements and pour them over the venison.  Allow to marinate at least one hour. (Longer for a stronger taste) 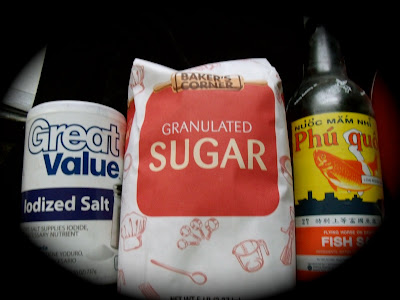 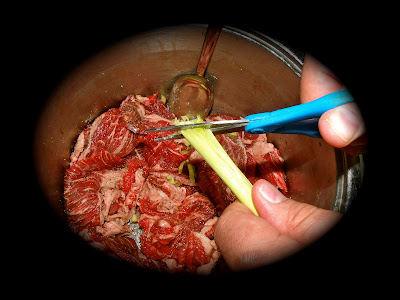 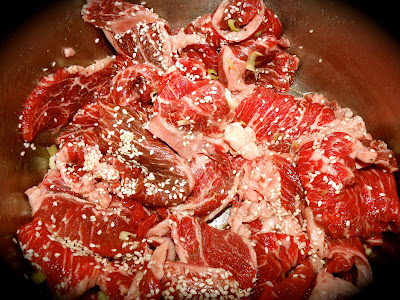 Next we want to saute the meat. To sauté the meat, place a tablespoon of butter (or butter ghee if available) in a cast iron skillet. Place your venison in the skillet and allow it to cook to your desired color. 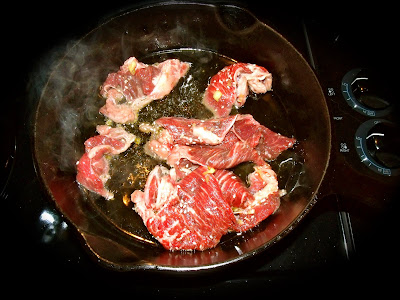 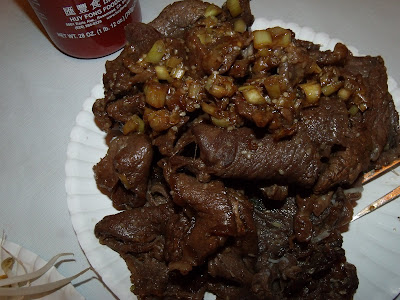 Boil a 16 oz. package of vermicelli noodles and drain them. 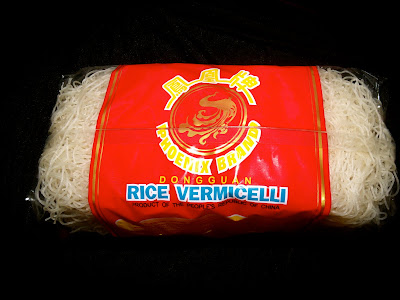 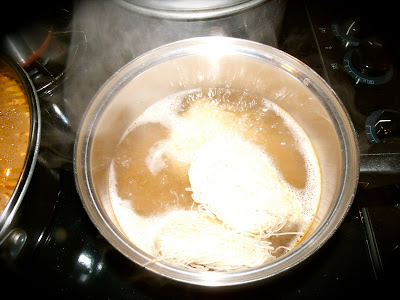 Place the meat over the noodles and top with shredded carrots, bean sprouts and fresh mint. 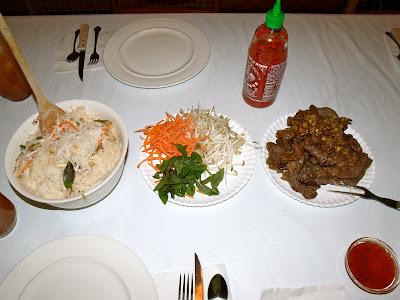 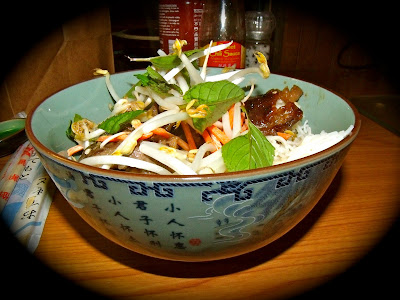 It's smoky, sweet, sour, spicy and crunchy. You can serve it over cold noodles or even rice if you prefer. Just one more way that you can taste the world around you.