Ten years ago the words 'food truck' concocted images of moving greasy spoons serving triangle shaped sandwiches and the equivalent of Mel's chili. (Children of the Eighties holla!) Affectionately known as 'roach coaches' these rolling concession stands left a bad taste (literally) in most of our mouths.

Several years later a food revolution has started. No longer are food trucks the lower species on the culinary evolution scale. They are now chic rolling kitchens that frequently serve up gourmet food in a mondo artistic fashion. The food truck revolution has taken a hold in cities like Los Angeles, Seattle and Portland where literally thousands of customers flock to these chow wagons on a daily basis. 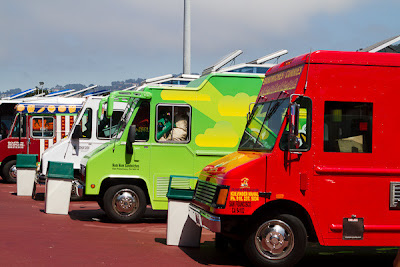 Many of the food trucks do all of their advertising through social media outlets. One food truck owner stated " We can send out 144 characters and get 1,000 people to our truck!"  While you can find American standards like burgers and hot dogs on these trucks, there is a truly eclectic buffet of foods that you can find in the modern day food truck scene. Korean short ribs, Shepard's Pie, Indian curries and a host of diverse dishes are now being served out the side of the trucks.

So you can imagine my surprise to hear that Memphis is now home to a growing food truck scene. Yes foodies, there is a Santa Claus! On Sunday June 24th there was a 'Food Truck Rodeo' held on Broad street in Memphis. A host of food trucks were there serving up hot and fresh dishes. Each one having their own unique taste and approach to street foods.

Food trucks from Revival, Fuel, Tamale Trolley, Yolo, Marks Grill, B&B, Quincy's, Crumpy's Square Meal on Wheels, Kona Ice, Sleddogs and Memphis Munchies all made an appearance. The temperature was hot, the crowds were plenty and the food was tasty! 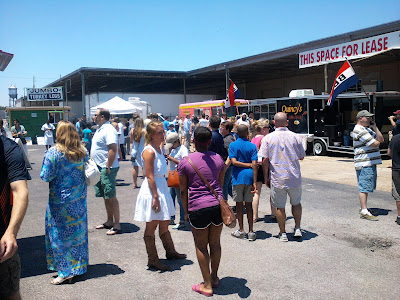 I had heard about Revival for quite some time and decided to try their Buffalo Chicken Sandwich. If your thinking to yourself "What can be done with buffalo chicken that hadn't been done?" then please hold that thought. The chicken was pulled (not a patty) nicely marinated and served with a wonderful slaw on fresh baguette. It had just a hint of spicy but not too much to kill the flavor. Really nice. The lady running Revival advised me that their menu is ever-changing which means I can try a completely different dish every time I see them! 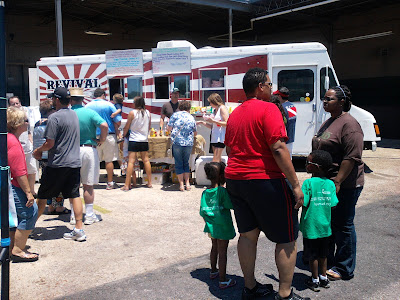 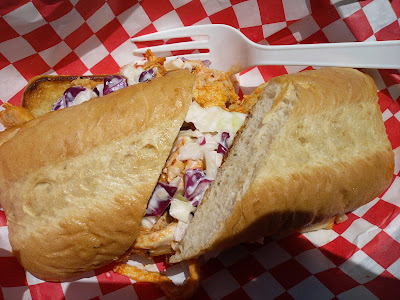 My second dish to try was from Fuel.  Fuel specializes in using fresh ingredients including meats and poultry that are all grass fed with no antibiotics. Their menu was quite varied with items ranging from Bison tacos to veggie tacos. I chose to try the 'Grilled Cheese and Berkshire Bacon'. Holy mother of God, this simple yet complex heatstopper was made with heavily buttered country white bread, stuffed with baby swiss, cheddar and provolone and bacon. I gave my friend a bite and he looked at me and said "that is just wrong." Aaaamazing. 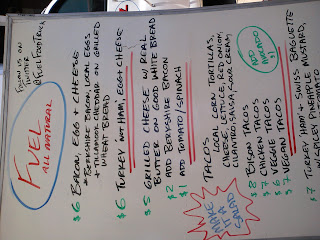 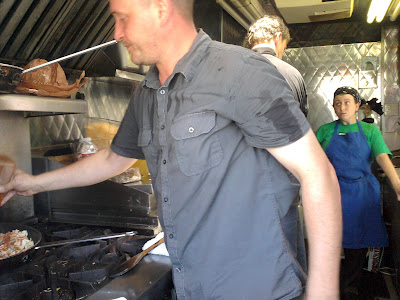 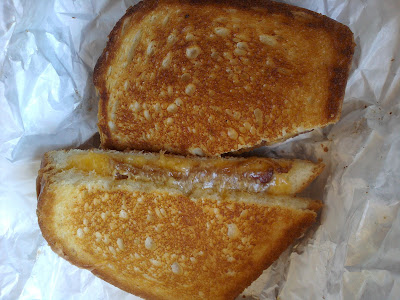 My friend Brian decided to try a barbecue bologna (Mississippi prime rib) sandwich from 'Scooter's Bar-B-Que'. It was a hunkin chunk of delicious pink pork slathered in a rich brown bbq sauce. He followed it up with a plate of tamales from the ever popular 'Tamale Truck' which he assured me was quite delicious. 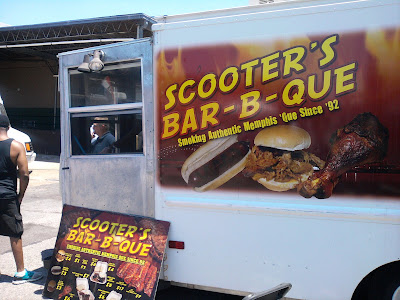 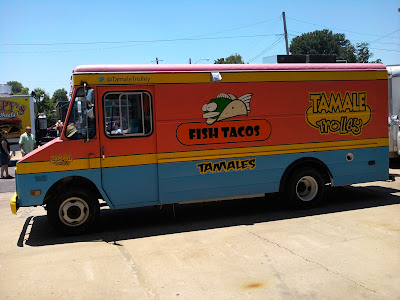 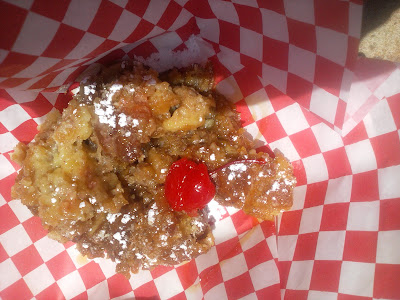 If you could eat heaven. If you could sample Utopia. If you could digest world peace....let me just be blunt with you....IT'S DOUGHNUTS AND BUTTER AND CARAMEL....should there be any more questions? I just got a shiver thinking about it. This dessert will probably go on my list of last meal desserts. Amen, halleluiah, so let it be done.... 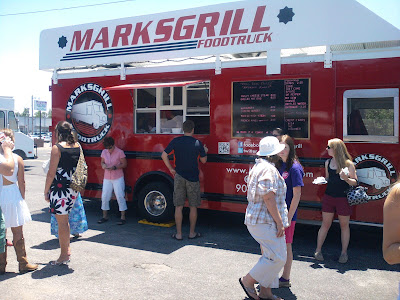 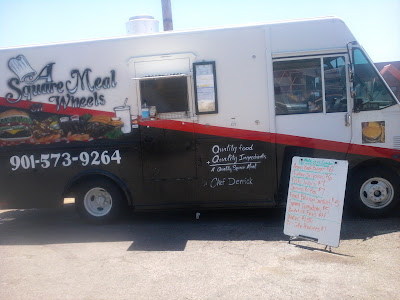 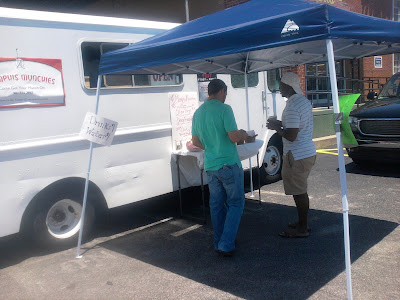 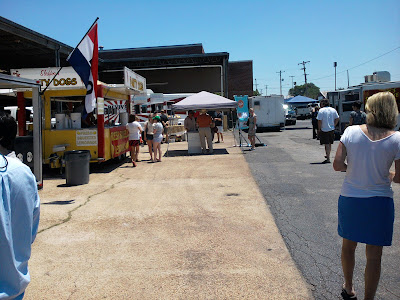 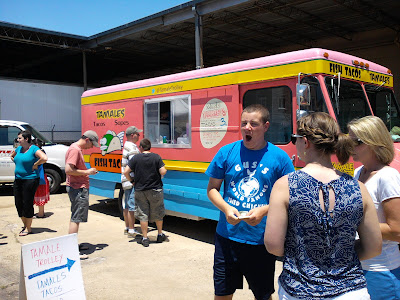 I was very encouraged by the number of people who came out and ate in the heat! The food truck movement is growing in Memphis and it will continue to help the local food culture grow. Support your local food trucks and preserve foodies in the Bible Belt!

Tacos under the Arch: A Hispanic community in St. Louis

When most of us think of St. Louis we use think of Cardinals baseball, the Arch and toasted ravioli. But did you ever think of St. Louis as being the home to a thriving Hispanic food scene? Talk a walk down Cherokee Street in downtown St. Louis and you'll see 'Cherokee Row', a district of thrift and antique shops, Anheuser Busch brewery and dozens of eclectic indie shops.

But walk a little further down Cherokee and you'll begin to see it. Wonderful pastel colored signs and painted images of women preparing tortillas amidst colored jars of green and red salsa. The smell of grilled meats sauteed with citrus juices permeates the air as smoke rises from behind little Mexican cafes. Welcome to little Mexico in the heart of the gateway to the West. 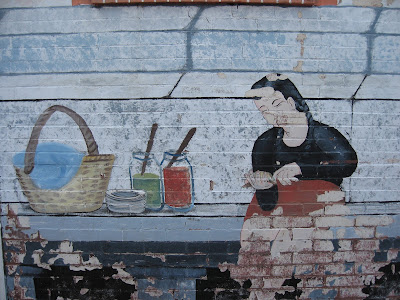 Cherokee street is home to a bustling community of markets, shops and cafes. One of our first stops on Cherokee is Diana's Bakery. Diana's is a traditional Mexican bakery that serves homemade breads, cookies and assorted desserts. Diana's is so highly acclaimed that it was awarded St. Louis' newspaper 'The Riverfront Times 'St. Louis Best Bakery Award' in 2010. 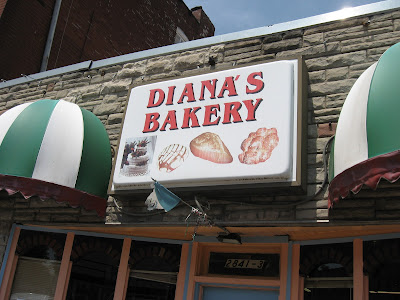 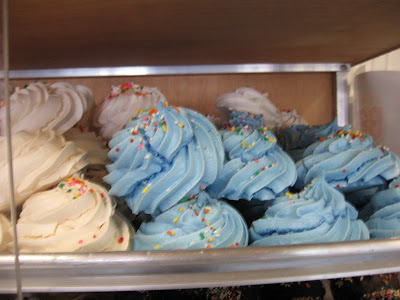 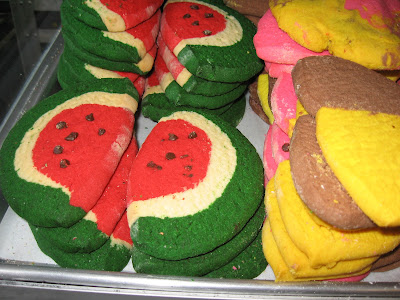 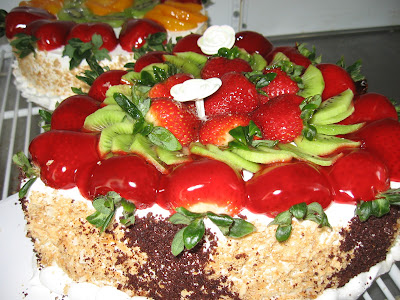 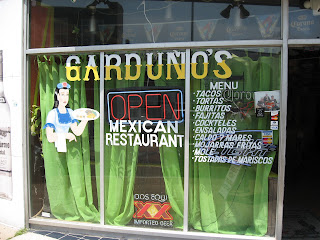 Across the counter a group of elderly women are working on a tray of cinnamon covered churros. Stocked shelves adorned with cakes, pies and tarts fill the room. Diana's is a dessert lover's palace.

But perhaps before you indulge in sweets you would like to scoop up some lunch? There are a number of cafes and restaurants throughout the district that serve fantastic traditional Mexican faire.  Open air cafes selling freshly fried pork rinds called 'chicharones'. Thirsty? Try a glass of 'horchata', a sweet concoction made of rice, almonds, cinnamon and vanilla.  And there's then there's the classics..deep stuffed pork tacos, grilled arrachera (skirt steak) and steaming bowls of menudo. 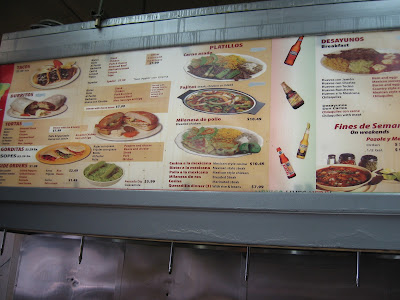 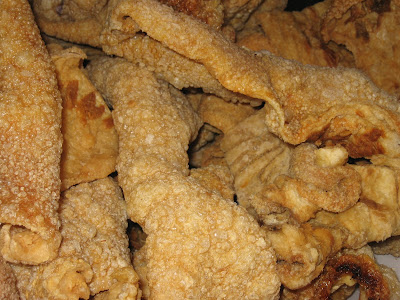 We decide on eating at Taqueria El Torito. El Torito is part grocery and part restaurant. As we enter the grocery, a man is covering fresh roasted corn with  Mexican sour cream, lime juice and chili pepper. A little old lady presses fresh homemade corn tortillas at a small table. 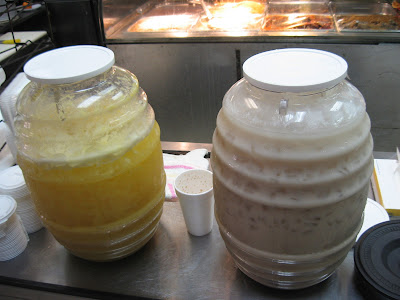 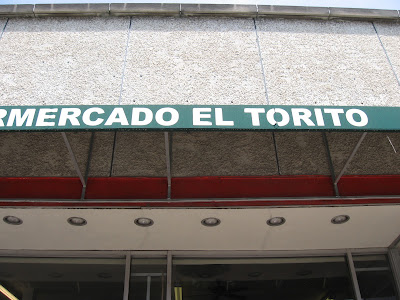 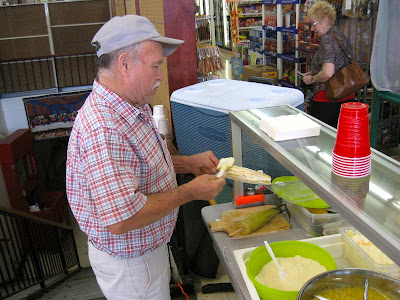 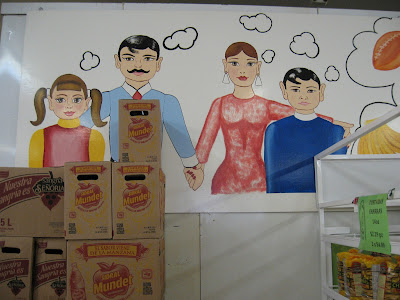 As you make your way into the restaurant you can't help but notice the tall stretching architecture covered in murals of Aztec daily life. A large Hispanic family laughs and enjoys piles of food at a table next to us. I order Tacos Al Pastor, Tacos Lengua and Carnitas. The waitress brings us a woven basket filled with warm flour tortillas. Puffed pastry like tortillas with little brown dark spots where they have almost burned. So good.

The waitress brings our dishes to the table in a display that could only be called 'epic'.
I make my friend MaryJo try a tongue taco before I tell her what is in it. "It's good isn't it? It's like really good roast." She smiles and lifts the taco to her mouth, chomping away. "Know what it is?" I ask. She stops. " What? What is it? Oh boy..." I tell her that it's tongue. She makes a face and continues eating.

The waitress brings us several different bowls of salsas. There is a brown soupy salsa made with poblano peppers. Smoky and spicy. One is green made with tomatillos and jalapenos. Citrusy and spicy with a little bit of lime juice. As the table begins to crowd, she places bowls of chopped onions, limes and cilantro amidst the heap of food. 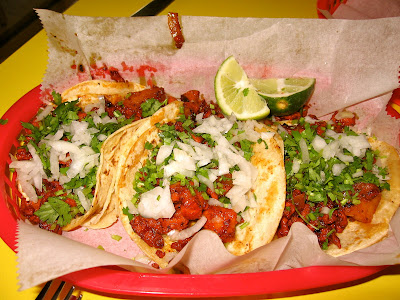 We round our trip of Cherokee street with a tour of some of the many markets. Fresh spices, cooking utensils, clothing and various foods all from Mexico. If your looking for something really different to do in St. Louis, check out the Mexican food community on Cherokee.