A few years ago I was in a little Mexican grocery where I spotted a beautiful tall slender glass bottle of Coca-Cola. The fact that it was in a glass bottle and even better a 'tall' green glass bottle made it stand out. These types of bottles used to be standard fare in the little country grocery stores found throughout West Tennessee. I can remember sliding open a freezer's glass door and gripping a metal lid and pulling out an almost painfully cold soda pop.The little stars on a green Sprite glass bottle seemed to sparkle to my young eyes. I remember sodas being a treat, not simply an accompaniment that you downed with every meal. The whole 'ceremony' of using a soda machine seemed to build the excitement. The clunking sound of your change hitting rock bottom as you swung open a glass door and gazed upon this amazing gallery of colored bottles. 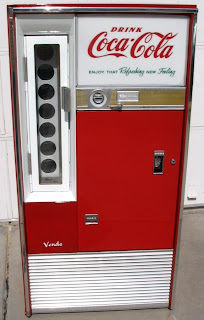 For those of you under the age of thirty, soda machines weren't always bright colored buttons distributing automated refreshment. At one time Coca Cola even released a machine that 'talked' with a robotic synthesized voice that amazed us wide-eyed kids in the Eighties! But there is a deeper thing that is missing in our world that goes deeper than the mechanics of soda machines...The soda.

Yes young Americans, there was a time when you could pop the top off of a bottle of Coca-Cola and the smell of lavender would immediately steal your senses. The first swallow of the cold dark syrupy treat would glide down your throat and immediately make your eyes widen. The burst of carbonated goodness was almost over bearing. Unfortunately, there are two wonderful elements that the illustrious Coca-Cola company sought to remove from their wonderful product that have left a generation of us wanting....lavender oil and real sugar.

Lavender oil used to provide Coca-Cola with a wonderful flowery perfume scent while real sugar gave the soda it's signature sweetness. Back in the Eighties Coca-Coal decided that it was to expensive to use real sugar and switched to high-fructose corn syrup to make the soda sweet.

For those seek the Coca-Cola of days gone by, the promises of this taste can be found again in what many are terming 'Mexi-Coke'. Found on the shelves of Mexican grocery stores and in some restaurants, the Mexican formula for Coke includes the inclusion of the much coveted cane sugar sweetener. The taste is a 'cleaner' taste that goes down smooth. Some have noted that it tastes more 'natural' than U.S. sodas. 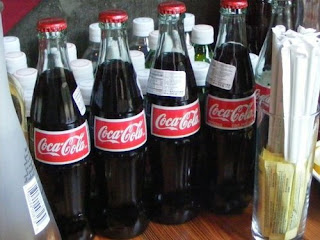 Newspapers have reported that the U.S. based Coca-Cola has expressed disapproval with the imported soda being brought into the U.S. The fear is that consumers will eventually demand the American based soda to be produced with actual sugar which the company feels is too expensive to make. (However Coca-Cola has made some exceptions such as the production of a sugar based 'kosher' Coca-Cola product called  'Passover Coke' around Jewish holidays. ) 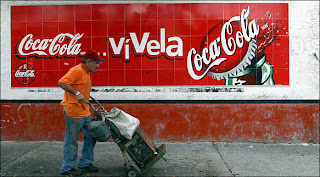 Here in the U.S. the Mexican drink has gained such a following that some have termed it the 'Cult of Mexican Coke' while there is even a Facebook page called 'Gringos who love Mexican Coke'. The popularity of the product has even caused some U.S. based businesses like Costco to carry the sweet Latin alternative.


So if your feeling a little nostalgic for the taste of sodas gone by, drop into your local Mexican grocery and grab up a bottle of Mexi-Coke. It will certainly take you back!
Posted by Tony at 9:41 AM No comments: