The work on the historical landmark Sam's BBQ in Humboldt Tennessee continued on Saturday, July 28th. Our crew continued work with a new roof being added to the pit and former kitchen. A team of masonry experts descended on the pit to rebuild the fiery furnace that once served up some of West Tennessee's most memorable barbecue.

Scaffolding was erected as members of the team began to paint the exterior of the buildings and many worked inside removing debris from ceiling and walls. The heat from the noon day sun began to heat the necks and backs of the crew as ceilings were torn down and a new image of the once damaged building began to evolve. 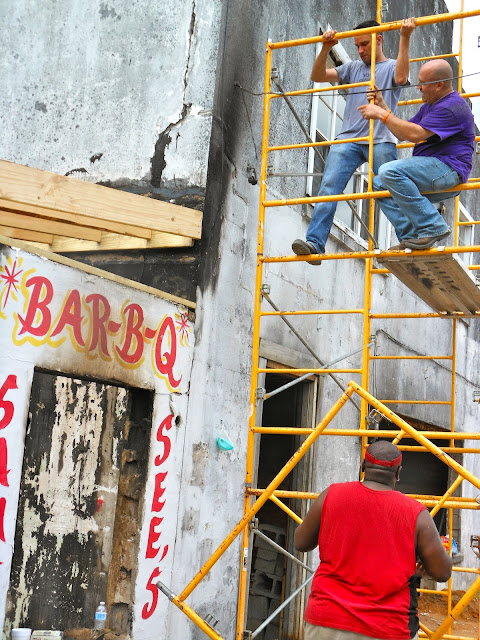 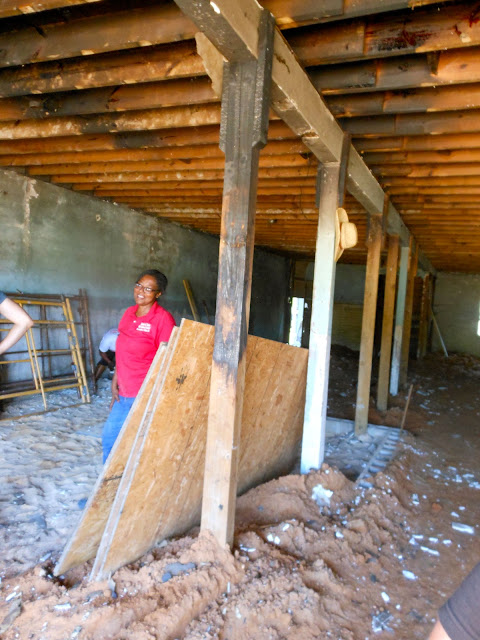 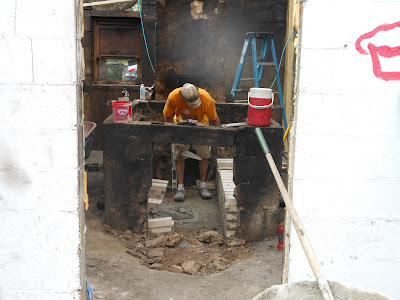 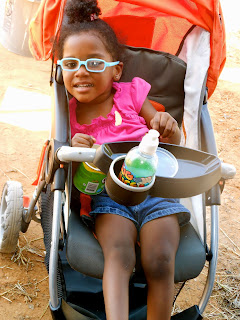 During this amazing weekend, word began to spread in the media and local community about the goodwill being carried out by those serving on this team. I was blessed with the opportunity to meet owners and operators of multi-million dollar restaurant chains, videographers, journalists, pitmasters and a host of people who came to give aid to a friend in the barbecue community. In this world of money and attention hungry misfits, it is easy to become jaded and wonder why these people would take time to come and sacrifice money, materials, talent and time for someone many had never even had met.

The answer is simple. Love. Love for fellow human beings in a time of crisis. Love for the deep rooted history that a family has passed on through three generations . Love for a culinary culture that represents the triumph of a deeply held cooking tradition that has endured times of slavery and segregation.

The rebuilding of Sam's will continue for weeks to come. The rebuilding is not simply the piecing back together of a small town food establishment. It represents something far deeper. It represents a very visible symbol of healing in a world where there is very little love being spread around these days.

The first day of cleaning out and rebuilding Sam's BBQ in Humboldt Tennessee went extremely well. Volunteers from Louisiana, Mississippi, Alabama, Georgia and South Carolina showed up to lend a hand to help rebuild history. As the day began we were visited by members of the local Chamber of Commerce who told us of a man who showed up at the Chamber looking for information on Sam's BBQ. The director of the Chamber noticed that the man had a strong accent and asked him where he was from. "Australia" he replied. He went on to explain that he had read about Sam's in Garden and Gun magazine and had come to see it in person.

Food historian and Food Network personality John T. Edge with the Southern Foodways Alliance brought several volunteers from the Alliance with him. 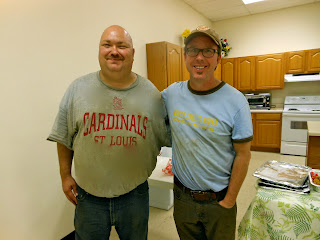 The crew was extraordinary in digging in and going to work immediately on ripping roofs, tearing floors and shoveling debris. Nick Pihakis of 'Jim and Nicks BBQ' brought a crew and began constructing roofs and stability for the structures. Angela and Paul Knipple, authors of 'The World in a Skillet: A Food Lover's Tour of the New American South' came from Memphis to give their time and energy to rebuilding.

As you can see in some of these photos, the building suffered great damage as the result of the fire. 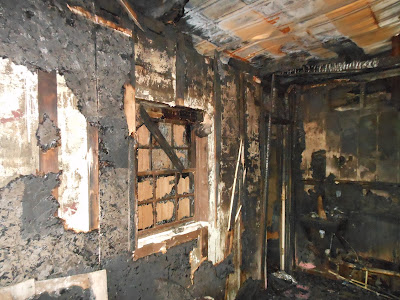 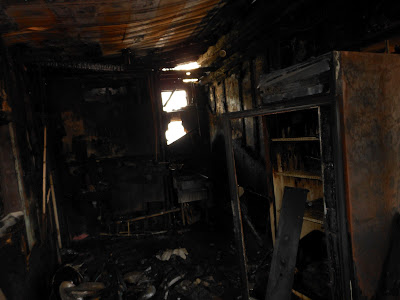 The building was going to have to be cleaned out before it could be rebuilt. The pit had been cooking for over 20 years. We began by ripping off roofs and cleaning out debris. 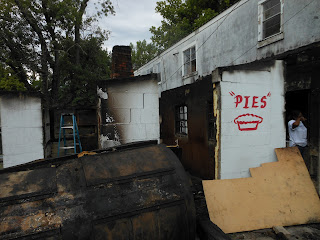 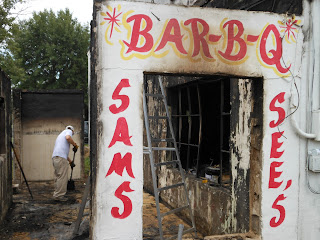 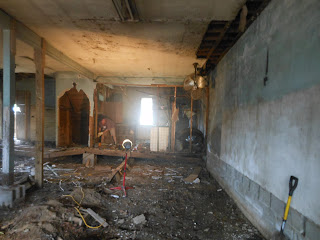 An amazing lunch was donated by Clark Shaw and the Old Country Store. The Shaw family showed up in person to serve a southern meal of fried catfish, spaghetti, slaw, fresh tomatoes from the Farmer's Market, watermelon and homemade pecan pie. During the lunch, the Southern Foodways Alliance presented the Donald Family with a portrait that one of their members had taken several years ago of 'Sam' Donald, founder of Sam's BBQ. As you can imagine, it was a touching moment for his daughter and granddaughter who both began to cry at seeing the photo. 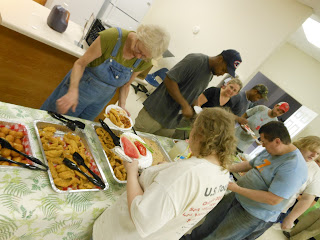 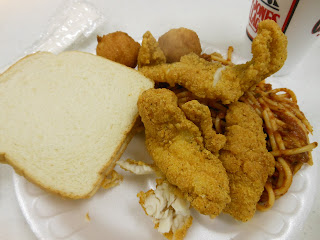 After lunch we began on cleaning out and restoring the pit. 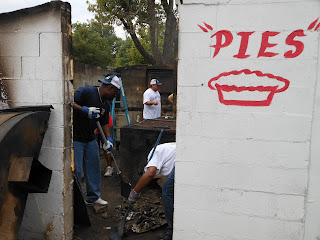 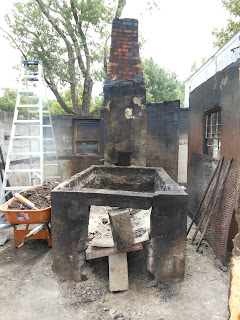 There is still much more to be done but in the words of the great anthropologist Margaret Mead "“Never doubt that a small group of thoughtful, committed, citizens can change the world. Indeed, it is the only thing that ever has.”

Readers of FITBB know my love for West Tennessee BBQ and the people that work so hard to keep this dying art alive. Our dear friends at Sam's BBQ in Humboldt Tennessee lost their business to fire and we want to help them rebuild. Please read the following from our friends at the Southern Foodways Alliance. 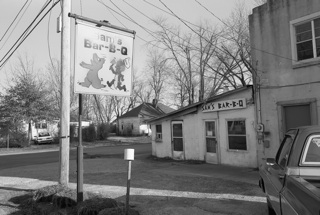 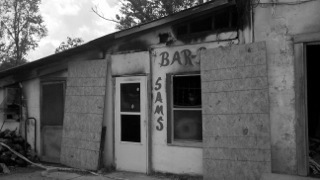 The Fatback Collective, along with the Southern Foodways Alliance, and Jim 'N Nick's Bar-B-Q, invites you to volunteer your time, muscle, and skills to rebuild an institution, Sam's Bar-B-Q in Humboldt, Tennessee.

Founder Sam Donald began smoking hogs in the 1940s. Through the years, Sam worked for other men, smoking their hogs and stirring their sauce. In 1988, Sam and his wife Mary Donald, opened their own place, Sam's Bar-B-Q, specializing in shoulder meat sandwiches and sweet potato pies.

Sam built a pit alongside his building, a dome-topped double-decker behemoth. Oak and hickory limbs burned down to coals on the bottom. Up top, those coals smoldered, cooking and perfuming pork shoulders.

When the SFA began its oral history work, Sam Donald was one of the first pitmasters interviewed.

Through the years his family commitment, and that of other great American pitmasters, has inspired all of the hosts of this work weekend.

Now it's time to give back.

In June of this year, Sam's, now run by John Ivory, son-in-law of Sam Donald, was hit by fire. Hard.

The family does not have the means to rebuild, without help.

That's where you come in.

From 8-4 on Friday and Saturday, July 27 and 28, volunteers from SFA, Fatback, and Jim 'N Nick's will join together in Humboldt to help put Sam's back on the path to reopening.

Toby Rumbarger from Jim 'N Nick's has done a site survey and developed a plan of work.

Mary Beth Lasseter of the SFA just ordered two construction dumpsters, which will be in place by Wednesday.

We need 30 volunteers to do demolition and haul debris, under the supervision of skilled foremen.

That translates to 15 per day. You may sign up for a shift HERE.

One more thing: We know that barbecue restaurants burn fairly often. It's a hazard of an industry that relies on fire for smoke. We realize that we can't come to the aid of every barbecue restaurant that burns. But we can help this time. And we hope, that by lending a hand, we can inspire others to do similar good works to sustain our great American folk food.

Humboldt is 16 miles northwest of Jackson, Tennessee, just off I-40 between Memphis and Nashville.

Sam's is located at 500 West Main Street in Humboldt.

Lunch will be provided gratis on site each day at 11:30 by Clark and Juanita Shaw of the Old County Store in Jackson.

We'll eat barbecue from Helen's in nearby Brownsville on the night of July 27.

After you sign up for a shift, SFA office manager Julie Pickett will email you with contact information for the hotel rooms we've reserved in Jackson. You will pay for your own hotel room.

If you volunteer, you should bring heavy work gloves, a hat, a mask, and a six-pack of water bottles. If you can, please bring wheelbarrows, crowbars, and large shovels.

If you try to volunteer and all spots are already taken, we'll put you on a wait list for this weekend, or, as needs are further defined, check with you about a future weekend.
Posted by Tony at 11:42 AM No comments: