While recently visiting friends in St. Louis, I wanted to venture into the city to attend what has become a 70 year tradition for many St. Louisians. Every Wednesday families pile into the halls of Saint Raymond's Maronite Cathedral in downtown St. Louis to sample some of the best homemade Lebanese cuisine available. 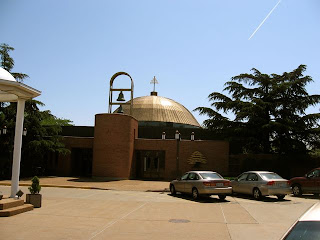 The Cedars Hall is a large meeting center located on the grounds of this beautiful Lebanese Catholic church. Glass chandeliers hang from the ceiling as colorful paintings of saints and angels fill the halls. Even though we got there early, a crowd had already began forming inside the hall. 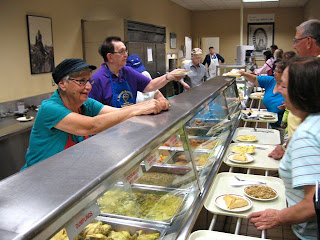 The aromatic smell of spices and seasonings filled the air as customers peered into steamy meat and vegetable dishes. The little lady in front of me tells me " you must try the stuffed cabbage". I begin to peruse a line of delicious looking dishes. My friends and I decide on a number of dishes including the stuffed cabbage, kibbi, meat turnovers, stuffed olive leaves, lentils, hummus and fresh Lebanese bread. 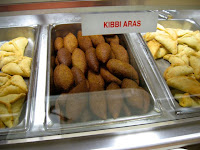 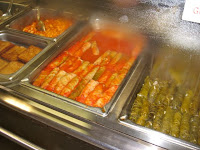 The kibbi is a dish made from ground sirloin meat, bulgur wheat and spices. Kibbi can be fried but I opt for the raw kibbi which is raw sirloin prepared with spices that cook the meat much like the citrus prepares the raw seafood in ceviche. A large Lebanese gentlemen tells me " Now go to your table, pour a little olive oil on top of it and crush this into it." With that he hands me several slivers of raw onion. I follow his instructions and the result is a delicious taste that I've never experienced before. The hint of meat is overcome by the middle eastern spices then followed by the savoriness of the olive oil and flavored by the onion. Very nice indeed... 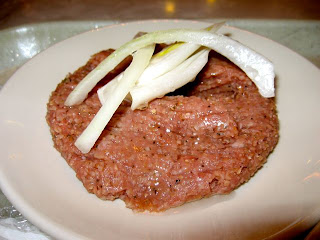 The grape leaves have a faint citrusy smell as they have been ladled in lemon juice. The inside of the tender green leaves are filled with seasoned beef and steamed rice. I have had very few Greek dolmades that I have enjoyed so these came as a surprise. They were very flavorful. 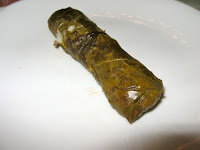 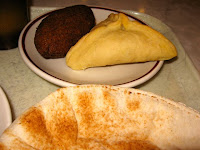 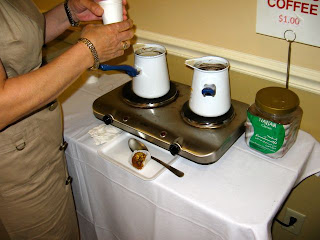 After we polish off the lentils, turnovers and homemade flatbread, we are invited to a dessert table filled with several golden honey ladden sweets. A kind elderly lady prepares Lebanese coffee with cardamom for us.

We try a piece of the homemade baklava. Pistachios and fried golden crust are covered in sweet honey. It was a good thing we were in a church because I almost had a religious experience! 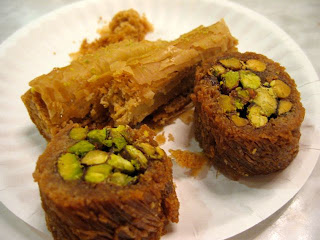 Every week the church serves over 400 people during lunch. We ate till we were stuffed and spent less than 15.00 for all of it. Next time you are in St. Louis and looking for some incredible middle eastern soul food, visit Saint Raymonds.


http://www.jacksonsun.com/article/20120516/LIFESTYLE/305160012/Experience-flavors-world-home?odyssey=mod|newswell|text|FRONTPAGE|p
Posted by Tony at 8:25 PM No comments: